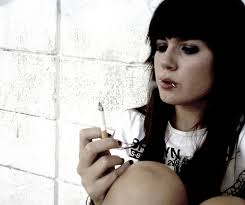 Smoking and drinking has been part of our social practices for decades, and even though everybody knows it's bad for the health, everybody still does it.

Smoking has been a substancially newer form of damaging one's health than alcohol, when it comes to Europe. It became known only after the New World had been discovered. The habit has since then become more and more popular, with major leaps in tobacco consumption during the industrial revolution, when it became possible to provide tobacco in the form of industrially manufactured cigarettes, thus lessening the price, and the first and second World Wars, due to the fact that soldiers would be given cigarettes by charity organizations and such.

The health problems relating to the use of tobacco have also been long known. Here is what King James the First thought of smoking:

„You have not reason then to be ashamed, and to forbeare this filthie noveltie, so basely grounded, so foolishly received and so grossly mistaken in the right use thereof? In your abuse thereof sinning against God, harming your selves both in persons and goods, and raking also thereby the marks and notes of vanitie upon you: by the custome thereof making your selves to be wondered at by all forraine civil Nations, and by all strangers that come among you, to be scorned and contemned. A custom loathsome to the eye, hateful to the Nose, harmful to the brain, dangerous to the Lungs, and in the blacke stinking fume thereof, neerest resembling the horrible Stigian smoke of the pit that is bottomelesse."

Now it is widely known that smoking may and does lead to lung cancer, in fact it accouts for 87% of lung cancer deaths. It also leads to Chronic obstructive pulmonary disease, which is a group of diseases which most resemble bronchitis. Tobacco is also responsible for many cardiovascular diseases. These are just a few consequences of smoking.

The consumption of alcohol, assuming it is in moderate amounts (which is rarely the case), is in fact beneficial to a person‘s health and those who drink little tend to live longer than those who don‘t drink at all. Of course, the statistic is flawed due to the fact that those who don‘t drink at all are, in many cases, ex-alcoholics or can‘t drink because of health problems.Either way, keeping drinking at moderate amounts is a trial of the will not many people can withstand.

The excessive use of alcohol leads to many detrimental effects, such as irretrievable changes in the neural system, liver diseases (cirrhosis, for example), hepatitis and last but not least - cancer, a wide range of types of cancer, as a matter of fact.

The biggest problem is that these damaging effects are continual, because the consumption of alcohol in excessive amounts often leads to alcoholism, thus preventing people from quitting.

Sure we all get wasted once in a while, we like defending ourselves that it‘s a holiday or a party or whatever-the-hell-else, but once you get into it, it‘s like in that song „All our days are like holidays, like the blooming of cherries".

Email ThisBlogThis!Share to TwitterShare to FacebookShare to Pinterest
Labels: health and fitnes